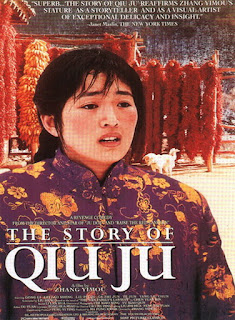 Qiu ju, a peasant woman in Shaanxi province (central China) seeks redress for her husband, who has been badly kicked by the village chief following a trivial dispute. Local authorities rule in her favor, the chief is ready to pay compensation but does not apologize.

Qiu ju appeal to ever higher higher levels of government but the result is always the same. There is a stalemate in the proceedings until an unexpected turn of events puts Quiju and the chief face to face again. She will come to regret being so stubborn.

One of the first films by director Zhang with his long time collaborator and, at the time, partner Gong Li.

Interesting peek into provincial China in the 1980s, and the contrast between hard, backward rural life and rapidly modernizing cities. The director uses "verité" camera to show us real street life, which makes the film part documentary.

This film also shows a very sympathetic bureaucracy, ready to listen to the grievances of a country girl, which may not always be the case in real China. Maybe the director was trying to be ironic about this or perhaps the movie is meant as an encouragement for real civil servants and law and order officials to do their job.

It is also a story of human relationships: one moral of the story is that even when something wrong is done to you, you need to keep calm and find a way out that is reasonable. For us non-Chinese the film illustrates very well the value of not "losing face" in China. All is well that ends well? Not really, but I won't give the ending away...

See my reviews of other films about China here in this blog.