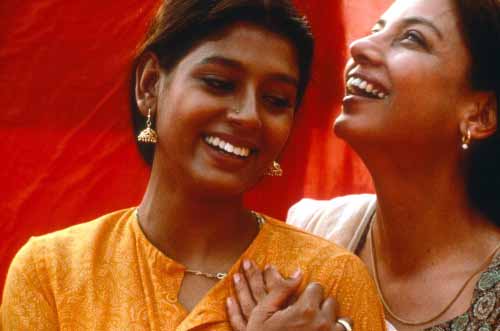 Ashok (Kulbhushan Kharbanda) runs a family business that sells takeout food and which also has a video rental store at the side. Ashok's extended family includes his wife Radha (Shabana Azmi), his brother Jatin (Javed Jaffrey), their ailing mother Biji (Kushal Rekhi) and their manservant Mundu (Ranjit Chowdhry), all living under the same roof.

Jatin, at the insistence of Ashok and their mother, Biji, agrees to marry the beautiful Sita (Nandita Das) in an arranged marriage, although he is actually in love with Julie (Alice Poon), a Chinese-Indian.

At first glance, you see a happy middle-class family going through the normal paces of everyday life. However, as the layers are slowly peeled back, we find a simmering cauldron of discontent within the family, with almost every family member living a lie. Both marriages in the family turn out to be emotionally empty, without love or passion. While Ashok is an ascetic who has taken a vow of celibacy, Jatin is a handsome ladies' man who is still openly seeing Julie even after his marriage to Sita. Ashok has pledged his total devotion to a religious holy man, a swami, in order to purge his life of worldly desires and temptations. Radha, bound by her sense of duty to her husband, agrees to go along with his wishes.

As you can imagine, with both husbands ignoring their spouses' emotional and sexual needs (albeit with reasons that are totally opposite from each other), it is only a matter of time before Radha and Sita look to one another for comfort and to satisfy their own passions. In this environment, it is only natural that Sita and Radha become fast friends, and, in time, much more than that. But their love is not without its share of painful obstacles.

Major controversy led this movie by Indian-Canadian director Deepa Mehta  to be widely attacked and banned in India. The film's unprecedented lesbian themes led to riots outside cinemas in India and necessitated police protection for the director for over a year.

A daring movie for India. For any country really, but especially for a country like India where the issue of female homosexuality was a big taboo in the mid-1990s and it still is. We learn a lot about an India which travelers hardly ever read of hear about, let alone see with their own eyes. It is an optimistic movie, in the end the right of the women to pursue their own path to happiness wins the day.

The pace of the movie is deliberate, with no rush and no slack, it is just right. We are taken into the home of a traditional Indian family where the modern lifestyle of one young husband contrasts with the stale tradition of another husband of a generation earlier. Both neglect their women and this brings the two ladies together more than they would ever have planned. It is ultimately a movie about freedom and love, not necessarily a movie about male chauvinism in India.

It is also a movie about changing India: millenary traditions crumble under the impact of modernity, and the movie suggests that this is a necessary transformation for the country.

This movie is one of three sometimes referred to as the "Elements Trilogy" by Mehta, including "Water" and "Earth".


See other films about India I reviewed on this blog.