At the crack of dawn a madly crowing rooster woke everyone up. He must have been worried that if we had overslept we would have missed the beautiful early morning colors. Thanks to the cock’s zeal we could finally enjoy, over breakfast, the verandah’s river view we had only been able to imagine the previous evening.


click on the map to view it in full size 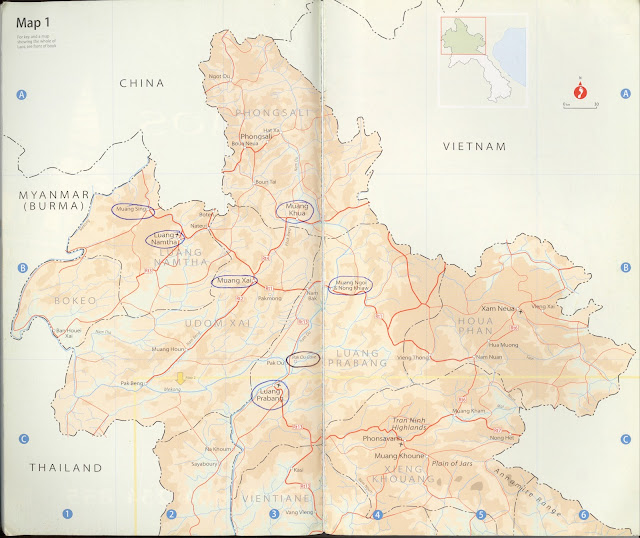 Banana pancakes were on offer, and this would become a habitual company for most of our future breakfasts in Northern Laos. There are two types of banana pancakes one commonly finds in Laos: the first kind, which we got here in Nong Khiaw, is made mixing the crushed bananas with the pancake dough before frying, and it is excellent. The second type, which we were served in less meticulous eateries, is just slices of bananas served on the side of plain pancakes, and it is OK but the flavors are obviously not as well amalgamated together.

Nong Khiaw is a small village on the left bank of the Nam Ou. A few very basic wood and straw guesthouses have been built around the boat piers. The village extends further inland, and it lives along one main street which runs parallel to the river. It is interesting to walk around because there is not much here which caters to visitors; it is genuine local life which unfolds under my eyes. At the far end of the main street to the north, life in a Wat was in full swing. Some of the the monks are busy cleaning up the yard, others were awkwardly trying to pry some coconuts from a tall palm tree. Four elder monks sat cross-legged in a circle, discussing quietly who knows what. Some one hundred meters outside the Wat complex, in the jungle, a young monk was keeling down in the shade, all by himself, reading out loud a holy book of prayers which he held high. His orange shining robe stuck out of the deep green of leaves and grass all around. He was oblivious to all the noise around him, including my approach, beautifully isolated in his effort to memorize his verses. A few novices in their teens asked me to visit the temple. Scenes of inexplicable cruelty were painted on the front wall, something they describe as the Buddhist hell. People having their tongues cut off, their limbs amputated...

I noticed that some of the houses use bomb casings, either whole or cut up in half, for various domestic purposes, such as support for roofs, flower pots, even just decoration. These are mostly from unexploded 1000lb bombs dropped by B-52s, which have been retrieved in the surrounding mountains. Laos the unfortunate distinction to have been the most heavily bombed country in history, more than Germany was during WW II!

A sign on the door of our guesthouse reads:


Behavioral “Do”s and “Don’t”s
On the door of the guesthouse a poster warns travelers as follows:
Do not buy old objects in the villages
Do not touch and do not walk across the gates of the spirits
Do not cuddle in public
Do not give incentives to beggars
The poster raises a number of issues which are very relevant to my journey. I had long been conscious that buying old personal or family objects (jewels, from villagers

As we move further upstream on the Nam Ou, the landscape flattens somewhat, the steep falaises make room for gentler hills. Villages along the banks become fewer and are farther between. Individual homes on stilts continue to appear, suddenly, as the boat continues to zigzag up the river, dodging treacherous cross currents and various assorted floating and semi-submerged sources of peril. The air was still, but the brisk cruising speed of the boat produced a gentle draft which made for a deceitfully cool feeling, which promptly vanished as soon as our water journey reached its final destination.

By mid-afternoon we were in Muang Khua, a small town which lies on a steep section of the Nam Ou’s right bank, on our left as we sail upriver. A cement pier was almost deserted and we could comfortably disembark and unload. No sign of the van driver we had hired for the continuation of our overland trip tomorrow. OK we’ll worry about that later, now we need a place to sleep.

Roberto and I left the others at the pier and went looking for a guesthouse for the night. We could find two, both pretty basic but acceptably clean and almost completely deserted. Roughly speaking, the eleven of us had just increased the tourist population of Muang Khua by some 200 percent. We opted for a quaint guesthouse high on the riverbank, with a suspended verandah built entirely with oversize bamboo poles, some perhaps thirty centimeters in diameter, from which we could enjoy a spectacular view over the river and its left bank.

Muang Khua lies where the small Sop Kai river dies into the Nam Ou. It is the marketplace for several neighboring tribal settlements. A heart rending suspended bridge makes it possible to cross the Sop Kai at an altitude of over 100 meters without descending to its riverbed and cross over by boat. Thick steel wire holds the weight of the bridge, and rather loosely attached wooden planks, the size of railway sleepers, make up the usable surface. The whole structure swang with the wind and rattled noisily at the passage of bikes and heavily laden carts heading for the market, but the sunset view from above was dramatic. On the other side of the bridge a couple of paths climb up the hills and lead to several smaller villages.


Dinner at sunset, sublime atmosphere except for a heavy motorized saw that the carpenter next door put to use during dinnertime – the only time of day when he had access to electricity, I guessed, so it was hard to blame him.

Again lights out at ten, some candle light for diary writing and then to sleep.
Posted by Marco Carnovale